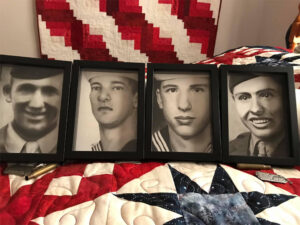 A quilt made by Gayla Goerge – with pencil drawings by her daughter Charissa Goerge – of her father in-law Reynold Goerge (Korea); her husband Joe Goerge (Vietnam era); her son Greg Goerge (active duty); and her father Dallas Andrews (WWII)

The seeds for making quilts for veterans in Louisa County sprouted after Tina Chaleki stopped by a booth selling Quilts of Valor kits in Virginia Beach and learned about the organization’s mission. She bought a kit. Several other Louisa Master Gardeners wanted to learn how to quilt, which led to working with Marie Farrell, who has been teaching classes in quilting at St. James Church in Louisa. Both Tina and Marie became members of Quilts of Valor and spearheaded efforts to involve more quilters in the project. Marie is one of the Master Gardeners – along with Tina, Regina Howell, and Barbara Kachinski – who have added sewing quilts to sowing seeds.

These locally-made quilts are intended for Louisa veterans, with the first going to veterans of WWII or the Korean conflict followed by Vietnam. On Veterans Day 2019, the women presented four quilts to area veterans, two in person at a ceremony and two delivered to homes. And the response has been heartwarming. Marie said she heard that one veteran in a nursing home slept with his quilt every night, and another stationed in Afghanistan took his with him when he was stationed there. 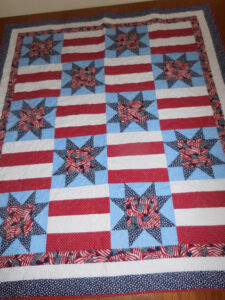 One of the quilts made by Tina Chaleki 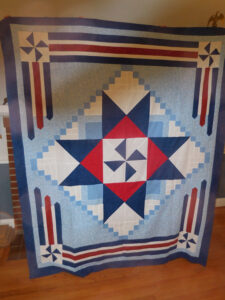 Among those awarded quilts in 2019 is Louisa native George H.  Marshall, now 95. George wrote about his WWII service in his first of two books, “The War Years, 1943-1945.” He was trained at Fort Eustis, Virginia, as a radio operator using Morse code and was sent to England where he joined the 633rd Anti-Aircraft Artillery Battalion Headquarters Battery. George risked his life in Europe and arrived at Buchenwald concentration camp when it was liberated. George said the quilt was a surprise gift from the ladies, and “I keep it in the family room.” George noted with pride that his wife Libby also makes prayer quilts through a different group at St. James.

Melvin Edwards, 87, is another Louisa veteran who was honored on Veterans Day 2019. It was an emotional day for Steven Summerville. Steven said that Mel “was not your typical veteran, as he volunteered for the Korean War. He did along with his two brothers and their father. He went into cooking training in Alabama. He didn’t say much about his time in the Army ever. I don’t know why.” 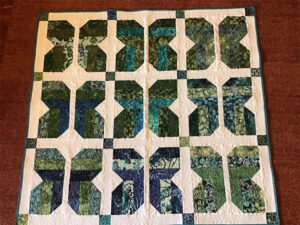 Steven said, “When they were awarding the quilts, they presented it and draped it over his shoulders. He didn’t see combat, so I think he didn’t want the recognition. I was astounded by the commonality all the vets had with each other, no matter what branch. I could see that the women who made them took wonderful pride in them. I wept during the whole event, as it was noble.”

Lee Earl Mason Sr., almost 96, was the third veteran honored with a Quilt of Valor that day. A life member of VFW Post 8947, he served as coxswain in the U.S. Navy, Standard Landing Craft, Unit #34, in the Asiatic-Pacific Theater, from March 1944 to May 1946. He was part of the amphibious navy on Ulysses Atoll, where Admiral Chester Nimitz was preparing to stage a secret attack on Japan. 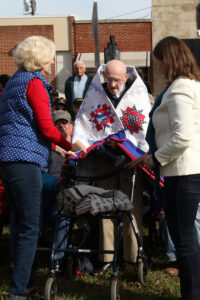 His son, Lt. Col. Myron Mason, said there aren’t many veterans left from that campaign. He said his father was very pleased and felt honored by the award of the quilt. 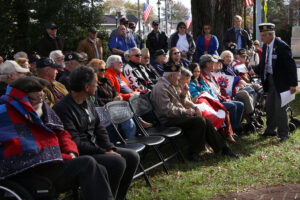 The handmade quilts are about 60 by 80 inches, and the fabrics and designs have a patriotic theme. The quilts can be made from patterns or individual designs. Each has a personalized cloth piece on the back that names the recipient, branch of service, and acknowledges the quilt’s maker. The veterans are also thanked for their service.

The quilters select their fabrics and design, cut the pieces, then stitch them together using their sewing machines, rather than doing all the work by hand. Some machine quilting gives the effect of hand-stitching. Since the local effort began in 2019, the group has made about eight quilts.

Before the pandemic closed churches and group activities, these quilters met weekly at the church to learn more about the process and enjoy the fellowship. Since the shutdown, the women have worked at home, but meet up once a week on Zoom. Although it doesn’t provide the same experience, Barbara Kachinski said the virtual experience “has been a good way to keep in touch with everyone since this crazy mess won’t let us gather. We get to catch up on what everyone is working on and exchange ideas for projects. Good way to get a decision made when we need to move on something.” 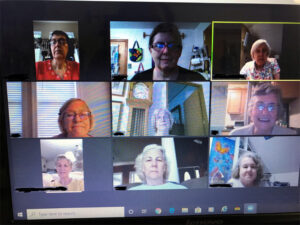 Also, she added that the Zoom calls are good for ”catching up on what everyone is dealing with personally and being there for each other as needed. Just good to ‘see’ everyone.”

Marie’s various quilting groups have worked on other service projects through the years, including quilts for SHE (Shelter for Help in Emergency) in Charlottesville and the Ronald McDonald House. Some members are now also making masks for people in the community.

Tina said that most quilters just make the quilt tops. The patterns are cut from high-quality fabric, and once assembled and stitched together, most are sent to quilters in Fredericksburg or Charlottesville, who specialize in finishing the quilts with the batting and backing. Each participant purchases her own materials, some from online sources and others from fabric stores or their own fabric stockpiles. 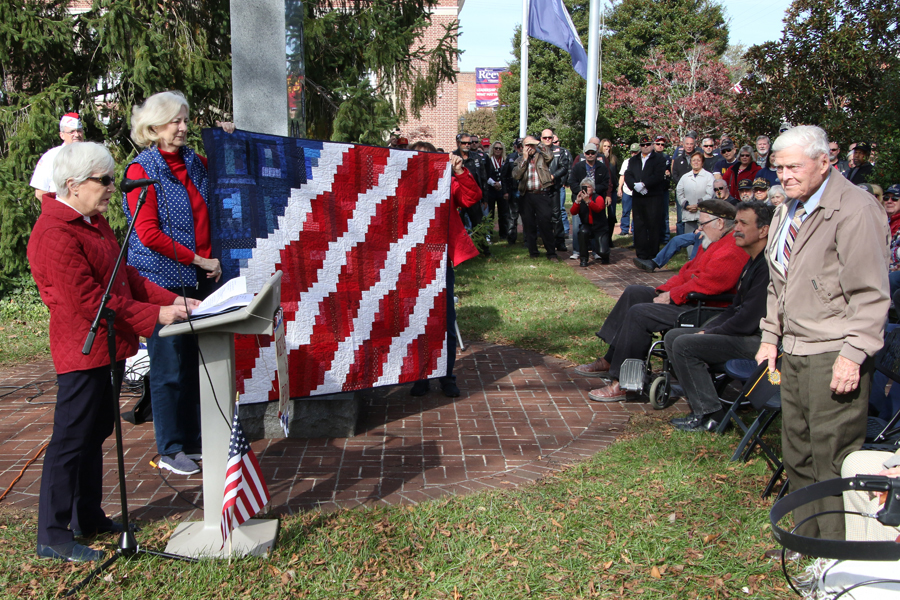 Often there are special or personal reasons for making the quilts. Gayla Goerge is one of the newest members of the sewing group. She said, “I am part of a military family. My father served in the U.S. Army during World War II. Both of my brothers joined the Air Force Back in the 1970s. My sister married a sailor, and I also went on to marry a sailor in the U.S. Navy. My husband served eight years during the Vietnam era. After 9/11, my youngest son decided he wanted to join the U.S. Navy. He is currently a chief based out of Maryland. He has decided to make this his lifetime career. You can see why I am so very proud of our U.S. military. I was thrilled when our sewing group decided to start making Quilts of Valor.”

Marie’s husband, Tom, served in the Air Force in Vietnam, which personalizes the experience. 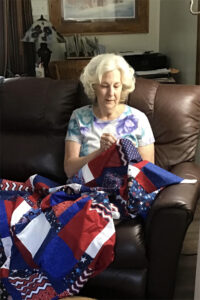 Barbara is another member of the sewing group who feels that her participation has special meaning. “I feel honored to participate in the Quilts of Valor project. It’s a way that I can give back to those who bravely served their country. Just a way for them to know that their sacrifice is not forgotten. They deserve so much more.” 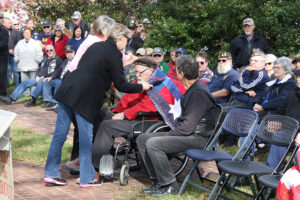 Veteran Melvin Edwards, seated with Steven Summerville, is awarded a Quilt of Valor by Tina Chaleki on left and Regina Howell (photo by Richard Hinde Photography).

She added, “Marie told me that she was going to teach some friends how to quilt, and maybe it might be something I’d like to try. I had been struggling after the death of my dad a year earlier. It was a godsend. Wednesdays quickly became something that I looked forward to. The ladies in the group are so fun and caring. Each one has their own amazing talent and each is eager to share. We have become a family.” 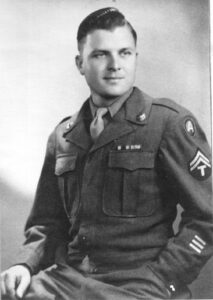 She admits that sewing was a new activity for her and she had much to learn. “My husband actually laughed when he saw me ironing my first quilt top. In our many years of marriage he had never seen me use an iron! I actually had to go buy an ironing board.”

The national organization called Quilts of Valor Foundation had its start in 2003 when the son of its founder, Catherine Roberts, was deployed in Iraq. She actually had a dream – more of a nightmare – about him being in danger, then envisioned him wrapped in a comforting quilt. That inspired her to make quilts for veterans. The “healing” quilts had to be either machine or hand-stitched and, as she said on the organization’s website, “would say unequivocally, ‘Thank you for your service, sacrifice, and valor.’”

Quilts are “awarded, not just passed out,” the organization notes. Official chapters dot the states, but other sewing groups are always welcome to participate, and the Louisa group is eager to have more quilters. 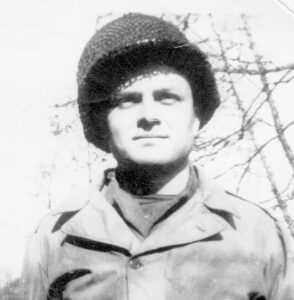 Veterans organizations also know the quilts’ value. Beth Rowley, who recently retired as commander of VFW Post 8947 in Mineral, is a retired lieutenant colonel in the Army. She said there are about 3,000 veterans in Louisa County – 10 percent of the population.

Summing up how the quilters feel about their projects, Marie said, “Quilts are made with love, and people feel that.”

Those seeds of love endure.