“Don’t volley in the kitchen” might be something you can imagine your mother saying to you as a child when you picked up your ball and ran past her boiling pots on the hot stove. However, it is actually a rule in the popular game of pickleball. 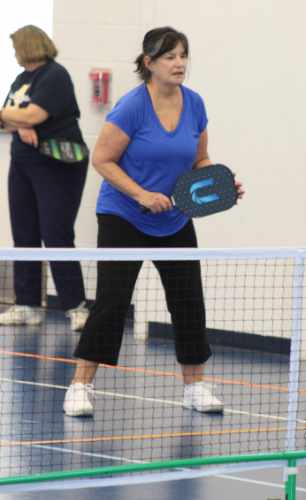 Charlene Easter remarked that the game of pickleball makes her feel like a kid again.

Pickleball is a combination of tennis, badminton, and ping pong that uses a colored “wiffle-like” ball, a rectangular paddle, a shortened tennis net, and a badminton-sized court. The “kitchen” (formally known as the non-volley area) is a seven-foot section surrounding the net where players have to “dink” (bounce) the ball before hitting it. In order to volley (i.e. hitting it without a bounce), you have to get out of the kitchen!

Pickleball was invented by three fathers on vacation with their families in Bainbridge Island, Washington in 1965. Their kids, who were bored, tried their dads’ made-up game, which used assorted items the families had available at the time. In the decades since, this boredom-buster not only spread across the nation, but the game has also gained international popularity as well.

Being on the West Coast with a warm, sunny climate, pickleball thrived since it could be enjoyed outdoors year-round. However, that hasn’t deterred the game from taking the East Coast by storm, too. In fact, The Villages in Florida have a couple hundred pickleball courts, and even at that, people are still lined up on the sidelines to play. Senior citizens have especially grabbed hold of the sport, and 70 percent of pickleball players are seniors.

Louisa County was introduced to the rage seven years ago. A part-time resident at Lake Anna who was used to playing pickleball everyday at her other part-time home in Florida found that there weren’t any offerings of the sport locally. In May of that year, she began teaching it outdoors through Louisa County Parks, Recreation, and Tourism (LCPRT) with a small class of five players. 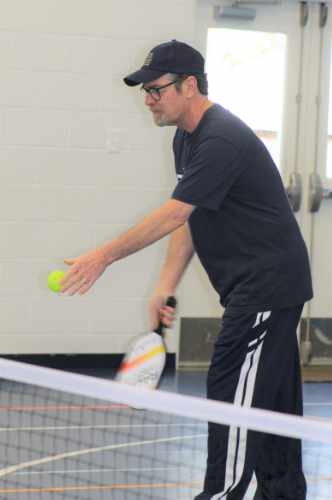 Bob Pitts serving the pickleball below the waist – one of the rules of the game.

Within two months, one of those rookie players, Annette Hayes, became especially hooked on the game and was already wondering what they would do when it got cold and wintery. How would they be able to play? Simultaneously, Annette learned that their instructor would be heading back to Florida in the fall, and Annette wasn’t ready to give up on her newfound addiction. She asked LCPRT if the small group of pickleball players could secure any indoor courts, and in July of that year, the pickleballers went indoors at the Betty J. Queen (BJQ) Center.

In addition, Annette was taken under the wing of a pickleball “ambassador” from Charlottesville, Margie Davenport, who continually encouraged, mentored, and prompted Annette to become an ambassador herself. Annette continued to learn from other ambassadors, attended retreats/meetings, and became Louisa County’s United States of America Pickleball Association (USAPA) Ambassador. Her role now includes promoting, teaching, and sharing the game of pickleball.

Annette’s teaching methods center around safety first, fun, and healthy play. Since scoring is one of the more complicated aspects of the game, Annette jokes that she teaches scoring by osmosis. “While we are practicing, I keep track of the scoring for them,” she said. “When they hear it continually, they just pick up the scoring system, and they are learning while playing a game.”

Annette’s teaching methods do work, because this writer was having difficulty serving the ball at first because she wanted to toss the ball up and slam it (like tennis). However, pickleball requires serving below the waist. She showed this writer how to get in a good serving position and swing her arm differently. Getting down that low was awkward at first, and it made her feel like one of the finger-snapping Jets in West Side Story! However, it worked!

Since that time, the numbers have increased into a burgeoning local pickleball program with venues being offered at Trevilians Elementary School, Jouett Elementary, and most recently at Zion United Methodist Church in Troy. Another giant boost to the Louisa County’s pickleball community came when Justin Bullock joined the LCPRT department three years ago.

Prior to coming to Louisa, Justin was involved in building a pickleball program from scratch in Fredericksburg. He has used that experience to further grow the pickleball offerings in Louisa County through a number of activities, including skills and drills and specific play times for all levels of players. “We offer lessons and clinics to introduce and teach the sport to beginners and to further advance the skills of the intermediate players,” Justin conveyed. “We give them opportunity to meet and socialize, learn and play the game, and to compete in tournaments.”

The LCPRT seeks to upgrade and improve their outdoor facility, and for the winter months, they continue to partner with local facilities. “We have a successful program, highly attended, well-respected in both the pickleball community and in the commonwealth,” Justin continued. “Annette is a great resource as our county ambassador, and our clinic instructors, Megan Washburn and Kayla Johnson, are high-level, highly-nationally-ranked players from Charlottesville.”

Helen Pitts, a member of Zion United Methodist Church, plays Pickleball with her husband Bob. In fact, a number of couples from the church and nearby neighborhoods play together. “I can tell you that the best thing about pickleball for me is social,” she said. “Meeting new people initially and developing relationships with others that you might not have met otherwise. The exercise is a big plus as well. The game lends itself to allowing people to play who have physical limitations, and also offers a more competitive venue for those who want it.” 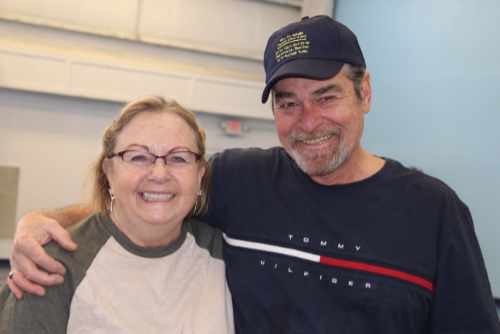 Charlene Easter, who is also new to the game and the Zion venue, commented that she had wanted to try out pickleball for a long time, but her schedule had never allowed it before. “I’m at a good stage of life now to do this,” she said. “Being a little older, I want the exercise, and I want the fun. It makes you feel like a kid again. Childlike.” Charlene also enjoys the social aspect of making new friends. “And everyone has been so nice and patient with us newbies,” she added. 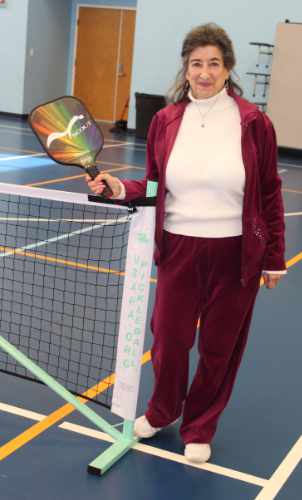 As sports go, pickleball is quite affordable because the only equipment a player needs is the paddle. While some pickleball paddles can cost between $16 – $130 each, Annette carries multiple paddles for new players to borrow and experiment with as they are learning. For lessons, clinics cost just $15, an intro session at Zion United Methodist is $5 (with all monies donated to the church), and open play is $2. Players find it convenient to purchase a punch card to cover multiple visits.

This writer has been playing pickleball for several weeks now, and she admits that it is addicting. Mundane exercise such as treadmills don’t hold her attention, and she struggles with boredom to get through 30 minutes on those machines. In contrast, our two-hour pickleball session flies by quickly since it feels more like fun than exercise. (Only during the subsequent days of soreness does her body remind her that it IS truly exercise!)

So, as a rookie, this writer won’t begin to explain the rules of the game to you. That is better left to the instructors/ambassador/advanced players. So, if you would like to dink in the kitchen, volley out of the kitchen, and learn this mix-and-match game made up by a few creative fathers, these are the two best ways to do it at Betty J. Queen Center:

1. Register for a Pickleball Clinic (Beginner/Intermediate/Advanced) held the first Sunday every month. Visit www.LCPRT.info or call 540-967-4420 to pre-register for $15. Beginners meet from 11 a.m. to 1 p.m. Intermediate participants meet from 1 p.m. to 3 p.m. The instructors are Megan Washburn and Kayla Johnson.

2. Call Louisa County’s USAPA Ambassador Annette Hayes at 434-960-5860, and she will help you find a time and place to begin. Beginners’ play takes place on the second and fourth Sundays of the month, where Annette teaches and works with new players to build on their skills.

Once you are up and rolling (and probably addicted quickly), you can find venues, times, and pickleball activities near you by checking the pickleball calendar at LCPRT.info.

At under five feet tall and just seventy-eight years young, what is Annette’s favorite part of pickleball? “Initially, I was looking for a way to maintain my weight and justify some sweet/salty evening snacks,” she jokingly said. But Annette ended up finding so much more: “fun, camaraderie, and a pickleball family.” 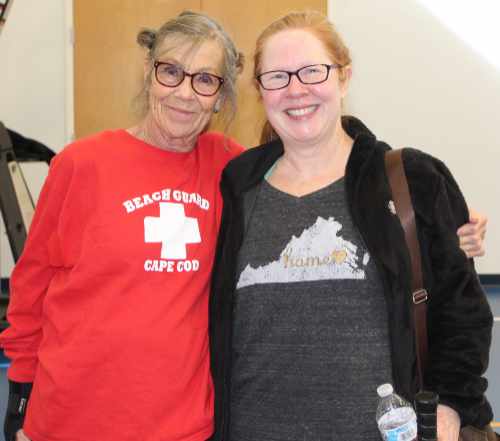 Rosemary Harris and Pam Wilson are new to pickleball and play on the courts of Zion United Methodist Church.

Annette enjoys sharing the game with others in the community and teaching its rules and how to stay safe while playing. Justin is proud of LCPRT and the pickleball program that is continuing to grow and expand. The newbies are looking for exercise, a social outlet, and new friends.

The advanced players are looking for competitive play. Whatever the reason, this writer hopes you will pick up a paddle and punch card and try it out for yourself.

See you on the courts – meet you outside the kitchen!