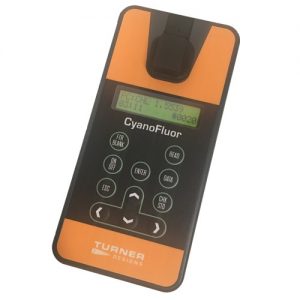 For over 40 years, Lake Anna has been a nearly pristine jewel in the Commonwealth’s crown, except for a major hydrilla outbreak in the early 1990s and a fish consumption advisory due to heavy metals that was issued about a decade ago. The jewel is sparkling a little less brightly right now, however, as harmful algae blooms (HABs) have reared their ugly heads over the past two years and are causing consternation among lake users.

Numerous species of algae occur naturally in the lake as they do in all fresh and marine water bodies. Phytoplankton, a small free-floating water plant, is considered the bottom of the food chain. It not only serves as source of food for fish, but it also helps oxygenate the water. A similar species, cyanobacteria, also exists in the lake and is often referred to as “blue-green algae.”

Both types can create algal blooms, the rapid growth and build up of phytoplankton in an environment. Most algal blooms are non-toxic and are natural occurrences triggered by increased water temperature and an abundance of sunlight.

However, there are several species that release harmful substances as they degrade and decompose. Cyanobacteria is one of them and is the primary culprit in the recent HABs Lake Anna experienced in 2018 and 2019. The “blue-green algae bloom” – sometimes referred to as pond scum – creates a thick, foamy blanket with an oily sheen on the water’s surface. The bloom is harmful to humans and pets, causing skin irritations such as blisters and hives. If inhaled or swallowed, it can cause serious liver, kidney, and neurological problems that can be deadly.

When the threshold for safety is detected for toxins, the Virginia Department of Health (VDH) issues a “no swim advisory” for that area of the lake, available on the agency’s website at www.swimhealthyva.com. The advisory remains in effect until two subsequent tests are below normal. 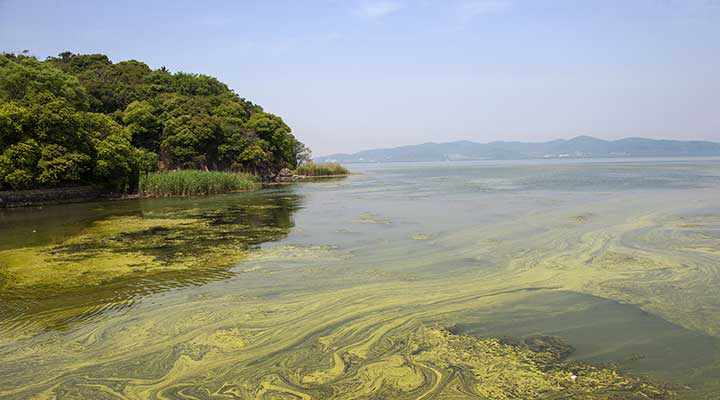 Cyanobacteria: A view of what potential blue-green algae blooms may look like on Lake Anna (submitted photo).

But why, after nearly four decades without detection, has the HAB reared its ugly head? Potential answers point to increased nutrients entering the water from lakefront property runoff, particularly nitrogen and phosphorus, which promote the bacteria’s growth.

Mike Rigdon, environmental preservation committee chairman of the Lake Anna Civic Association (LACA), believes the recent HAB outbreaks are the result of more testing on the lake and changes in the way the results are considered.

“The standards used to determine an outbreak changed recently as evaluated by the Virginia Department of Health,” Rigdon said. “And they just started testing the area a few years ago, so we don’t have a lot of historic data to compare to.” 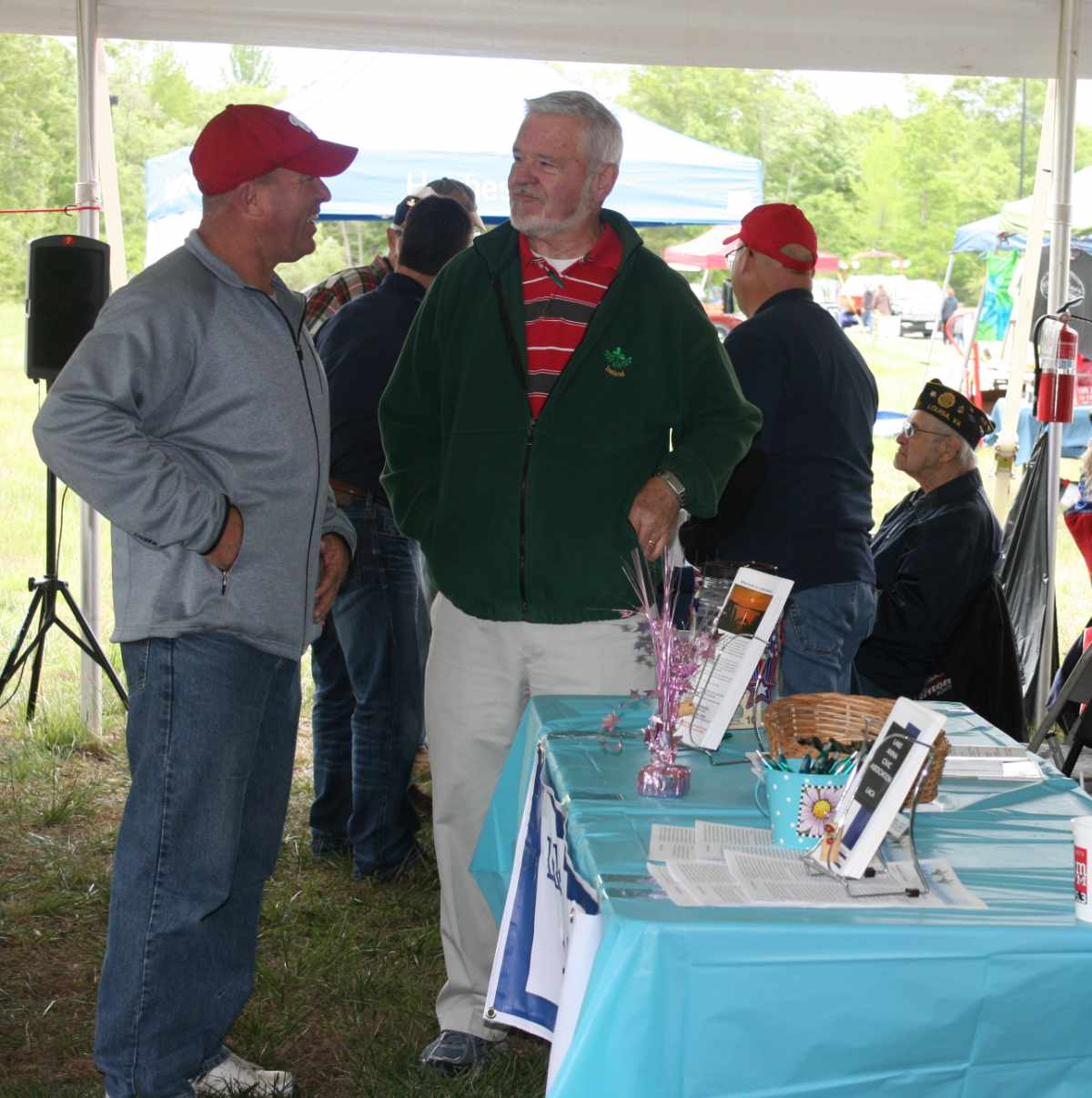 When the first outbreak was discovered in summer 2018, the primary areas impacted were upstream in Lake Anna, except for an anomaly at one downstream area, Fisherman’s Cove in Spotsylvania County near the dam. The area was designated for a “no swim advisory” by the VDH, and additional tests were conducted every two weeks. However, since the algae is free-floating, pinpointing the exact location proves difficult and ambiguous.

The discovery of the harmful toxins caught the area by surprise, as there had been no indication of problems prior to 2018. The uncertainty created health and safety concerns among Lake Anna property owners and users, as well as captured the attention of the three county government bodies and both the LACA and the Lake Anna Advisory Committee (LAAC).

The Civic Association is a non-profit, 501c3 organization comprised of members who have an interest in Lake Anna. The Advisory Committee is a quasi-governmental body made up of board of supervisor representatives from Louisa, Orange, and Spotsylvania counties, as well as a citizen member from each county and a representative from Dominion Energy (the owner of the North Anna Nuclear Power Station). Both groups are tackling the HAB issue, looking for ways to control and – hopefully – prevent future outbreaks.

LACA already has an established water quality committee that has been conducting water samples on the lake in conjunction with the Virginia Department of Environmental Quality for nearly 20 years. Its environmental preservation committee is working in tandem with the water quality committee to develop a procedure to collect samples and compile data on the cyanobacteria and algae levels. The environmental preservation committee has taken the lead on the issue and spent the past two years since the first outbreak networking with the three soil and water conservation districts, York River Watershed, various state and local agencies, state representatives, and community groups that operate around the lake.

A shot of how Lake Anna might look with harmful algae blooms (submitted photo).

As a result of the committee’s efforts, several strategies have been formulated to aid in reducing outbreaks. One of those strategies is designed with property owners in mind and includes suggestions on lessening the nutrients entering the lake. Rigdon provided the committee’s recommendations which are easily implemented by the landowners and include:

•Fertilize lawns in the fall in accordance with soil test recommendations. Inexpensive soil testing kits are available from the Virginia Cooperative Education offices in each county.

•If you have rental property, ensure that occupancy doesn’t exceed permitted capacity, as that stresses septic systems.

•Refrain from spraying retail herbicides near the shoreline or onto aquatic vegetation, as herbicides act as strainers for the nutrients.

•Create a two-foot shoreline barrier planted with native grasses and plants to filter runoff, and allow them to grow naturally without trimming unnecessarily.

•Operate boats in a manner that doesn’t unnecessarily stir up the lake bottom or erode shorelines where nutrients tend to concentrate.

Another strategy the LACA committees are recommending is water and sediment testing in order to determine the overall sources of nutrients. Feeder streams, discharge points into the lake, and tributary lake branches will be the initial focus to evaluate the nutrients entering the lake itself. The lake bottom will also be a focal point, as the sediment may contain the nutrient load and be introduced into the water column by wave or boat actions.

“We still have the nutrients coming into the water body, and we need to determine potential sources if possible as well as compensating for what is occurring naturally from wildlife and natural foliage decomposition,” Rigdon said. “We still need to do testing on the hot spots, particularly on the streams feeding the lake. We need to get some baseline information to formulate a plan of attack.”

The advisory committee lobbied state representatives this past fall to introduce legislation in the General Assembly requiring the Virginia Department of Health to conduct a study on harmful algae blooms during 2020. A joint resolution was considered, but it failed in committee, so a study this year is unlikely. The advisory committee has formed a science subcommittee, led by Spotsylvania County Supervisor Kevin Marshall, to lead its study on HABs. He has reached out to the Hampton Roads sanitation department inquiring about the cost for harmful algae bloom DNA testing and is waiting on a response.

“I am not sure they have ever been asked about the expense or how to go about doing it for another entity,” Marshall said. “I am not sure why it is taking so long to get a response.”

The subcommittee has looked into other options to control the nutrient flow, including adding wetlands to the streams, but Marshall said that option is very expensive. They are also evaluating the cost to conduct sediment tests and DNA testing on the nutrients, and he explained that early spring is the ideal time to get control point results.

As the spring and summer season arrives, both groups are working hard to reduce the impact of potential outbreaks with early testing and notifications, as well as continuing to seek solutions to the problem.

LACA recently approved the purchase of devices that can assist in detecting the presence of cyanobacteria and algae and give preliminary warnings of potential toxins in the water column. Those tests will be conducted on a site-by-site basis as its water quality committee begins its monitoring season in April and evaluators find potential issues. If tests are positive, additional testing will need to be conducted by either the Virginia Department of Environmental Quality or VDH, with VDH responsible for issuing the necessary advisories.