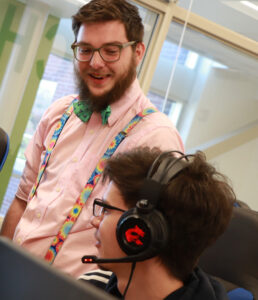 Coach Jacob Sarmiento (standing) coaches one of the participants in the Esports program at Louisa County High School.

When people played video games such as Frogger, Pac-Man, and Asteroids in the 1980s, the only championships they likely won were the top scorer at the arcade or a tournament against friends and family from the systems they had in their homes. No one ever imagined that half a century later, video games would be as realistic and competitive as they are today, allowing players to pit their skills against someone half a world away. Nor did people ever consider them a sport like football, baseball, tennis, or all the other traditional options offered by middle and high schools today.

Virginia students, including those at Louisa County High School, embarked on a pilot program known as “Esports” last year to prove that computer games require similar skill, knowledge, and training as the conventional sports offered at the same level. Esports is currently offered at the collegiate level as well as professionally, so offering it in high school serves as a training ground for those advanced levels.

“Esports is simply an electronic competition with some of the most popular video games in the world,” said Jacob Sarmiento, Louisa County High School’s head coach. “The goal is to field the best team in the world.”

But, the program is much more than just kids sitting in a darkened room with a controller in their hands trying to beat each other.

The Esports program focuses on three of the most popular games: Rocket League, Smite, and League of Legends. Smite and League of Legends both feature five-person teams, while Rocket League requires three people. Practices are held Monday through Thursdays in what is typically considered the “winter and spring” sports seasons, although Sarmiento said planning begins as soon as school starts with “conditioning” in September and practice in October.

Louisa County High School junior Adrian Patterson was part of last year’s pilot program as a sophomore, joining because of his love of video games. 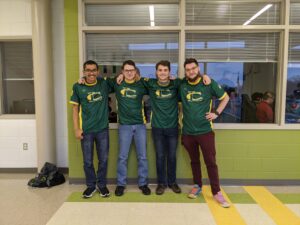 Coach Jacob Sarmiento (right) is pictured outside the Esports room with members of one of the teams.

“My favorite part of the program was being able to find a new game that I love and can play with my friends,” he said. “I also learned how to cooperate with a team that I could trust while playing in competitions.”

The school has computers specifically for use by the Esports teams designed to provide the highest and best equipment for game play. But, practices are more than just playing video games.  There is a set time for in-game play as well as a time of coaching skills and techniques. Perhaps the most important aspect is the book review since the rules and concepts can change as frequently as every two weeks, unlike other sports where the rules are for the entire season.

“As an example, League of Legends currently has 175 items that kids need to know and memorize what they do, when to get them, who to get them for, and what they counter and are countered by,” Sarmiento explained. “These items are adjusted every two weeks in game, as well as many of the characters are changed slightly to make them either less or more effective depending on what the team at Riot Games decides they want to change to effect the ‘meta’ – the overall status of the game.”

Sarmiento said his players must practice every day, have lightning-fast reflexes, communicate effectively, and possess the ability to anticipate moves before they happen. Each team has a “shot-caller” similar to a point guard in basketball or quarterback in football. The individual is not only playing the game, but is responsible for tracking everyone on the screen while reacting to everything that is happening to their character and offering strategies to each of his teammates.

“The shot-caller is my coach on the field as we try to take a step back once the game has started,” Sarmiento said. “That prepares them for what Esports is like in the professional and collegiate manner, where coaches cannot offer instruction or communicate once the match begins.”

Last school year, approximately 40 Louisa County High School students participated in the pilot program. The regular season lasts an average of eight weeks of play and competition, with teams re-seeded every three weeks to better match skill level and avoid “blowout events” that can happen in field sports. At the end of the regular season, teams that have placed in various competitions move into a playoff bracket similar to March Madness.

One of the three-person Rocket League teams made it as far as the state quarterfinals in the fall and was ranked second in the state when the school year was prematurely ended due to COVID-19. The Smite teams were ranked first and second in the state and played in the East Coast playoff bracket.

Sarmiento sees great benefit to the addition of an Esports program at the high school level. “It allows students who may not be interested in traditional sports a way to get involved and find their niche,” he said.

Patterson agrees. “I would tell other students who asked about Esports that if you love to play video games, then you will love the program,” Patterson said. “But, you have to work well with others and not act like you are playing alone. Being part of a team is crucial.”

Modeled after traditional sports teams, Esports members at LCHS have their own team jerseys and are mentioned during pep rallies and with school-wide announcements about upcoming matches and the outcomes of those competitions. It helps connect this set of students to the rest of the student body and allows them their own activity to take pride in and be recognized for, just like the football team winning a game or a golfer who hits a hole in one.

According to Sarmiento, Esports has been around for about 30 years. It started with the introduction of fighting games in the late 1980s and early 1990s, and the sport really took off with the creation of the game “Quake.”

“Today the market has games and competition for every game type out there that players are interested in trying to be the best at,” he said. “League of Legends is known as one of the most popular games in the world, with over 100 million viewers for last year’s North American World Tournament, topping Super Bowl viewership.”

Last year, Randy Fisher assisted Sarmiento with the program, working with the Smite team during practices and plays while Sarmiento ran the League of Legends and Rocket League teams. When needed, the two also reach out to others who can offer advice to the players. 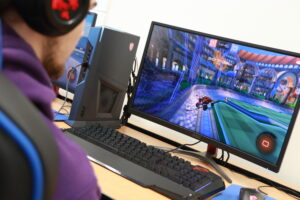 One of the participants in the pilot Esports program practices his gaming skills before a competition.

Plans for an Esports season this year are fluid, Sarmiento said, given the current uncertainty with COVID-19. As of August, Louisa County Public Schools is currently offering two academic options to students – in-person instruction two days a week on a divided schedule (Monday/Thursday or Tuesday/Friday), or a completely virtual learning option. Sarmiento said the situation is being monitored closely, and they are taking heed of health department and CDC guidelines to make sure students are as safe as possible.

“Coach [George] Stanley [LCHS athletic director] and Mr. [Lee] Downey [LCHS principal] have done wonders for our school to make sure that every student is incredibly safe and healthy,” he said. “Our kids will have to be six feet apart when playing and wear masks the entire time. All machines and chairs will be sanitized each night, as well as each player having an assigned computer and seat. In addition, we are allowing and encouraging students who can to play from home.”

Once again, Louisa County is on the cutting edge of offering the best for its students, and participation in the Esports pilot program is just another example. Esports is the fastest growing sport in the world, and with the current COVID-19 climate, it has gained even more popularity because of the restrictions on people gathering in groups.

“When all sports were put on hold, ESPN was and has continued actively broadcasting the tournaments for games like League of Legends with full commentary,” Sarmiento said. “In addition, sports like NASCAR and the NBA started competing virtually by way of the games for their sports. All of this was broadcast on ESPN to satisfy our love of sports and helped introduce the world to the joy and satisfaction of Esports.”