A Craft Studio Filled with Joy

A Craft Studio Filled with Joy

Liz Violette’s artistic mission for her students can be condensed into just a few words: “I really want to bring joy.” The joy in her Lake Anna craft studio comes with creating “awesome” projects, releasing stress, and building camaraderie. Women gather to use paper, stamps, “bling,” and special blending pens to fashion unique cards, shadowboxes, and tiles under Liz’s encouraging direction during three or more hour sessions. 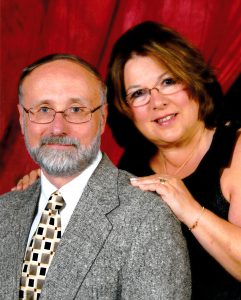 Peter and Liz Violette on a Norwegian Cruise in 2012 (all photos provided by Liz and Peter Violette).

Although her 16 x 24-foot studio is fairly new to Lake Anna, Liz has been sharing her paper crafting passion for more than 16 years. For many of those years, she worked full-time and then taught her crafts in late afternoons and evenings.

After her husband Peter’s retirement from the Marine Corps in 1992, the couple had dreams of owning a franchise business. They purchased a franchise of Handle With Care Packaging Store, rented space in a retail mall in Fredericksburg, and Liz became the day-to-day operator from 1994 to 2007. Peter already had a day job that sometimes took him out of state. Their store packed and shipped items of various sizes and shapes and was so successful that in 2004 and ’05, it was recognized as one of the company’s 40 top stores. 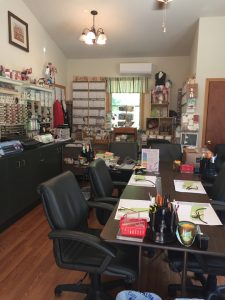 Liz’s Craft Studio at Lake Anna is ready for students.

It was a full-time job, yet Liz squeezed in time to pursue her artistic side as she became interested in Stampin’ Up! in 2001, and by 2005 she had become a demonstrator as a part-time job. (Stampin’ Up is one of the leading companies in the world for the paper crafting industry, according to Peter.) “They sell all types of supplies for making cards, paper crafting, scrapbooking, and memory keeping,” Liz added. She keeps her studio well-stocked for the projects that she and her students create.

When store customers noticed the cards and posters she had on display, they soon asked to learn the craft. In 2006, Liz began teaching in the store after it had closed for the day.

The number of students grew to as many as 80 after she created a studio in her Stafford home where she could both work and teach. The couple sold their Stafford home in 2017 and used some of the proceeds to add her craft studio to the Lake Anna retirement home they had built in 2004. In 2018, Liz started organizing, arranging, and setting up her new paper crafting studio. 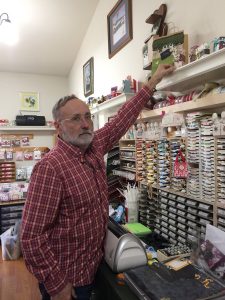 Peter Violette places a display on the studio’s top shelf for Liz.

Besides supplies, the studio includes eight-foot tables and chairs for up to eight students. “I have everything laid out on the tables with what is needed for that day’s class,” Liz said. The walls and shelves are covered with cards, 12-by 12-inch scrapbook pages, and 3D projects. The morning sunlight radiating through one studio window highlights the violet hues in the stained glass sign that Peter commissioned from artist Ekaterina Reier.

Liz explained that teaching the crafts involves preparing a project – usually cards – for each class. Sometimes a student requests a specific design, then all the students make their own version that day. Liz is very clear that she “controls the situation.” She said that her preparation work includes designing, cutting, and organizing the basic materials for usually three cards per three-hour $10 session. There are extra costs for materials beyond the basics. Outside of the classes, she is available to design and create cards and favors for birthdays or other types of events. 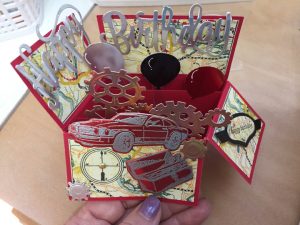 Using special pens that blend colors, students add their own creative touches. They glue materials and then may include ribbons, ink stamps, or other decorative elements. This is so they have something personal and “awesome” to take home, Liz said. Their satisfaction brings joy for her, as well as for them, she explained.

Certain projects such as shadowboxes can be more complex and are usually worked on in specialized groups. Liz’s neatly-organized studio is filled with supplies, but she encourages students to purchase their own frames at craft stores because of the number of choices available. Then they work with her on the interior contents. Often a family photo is the centerpiece, then all the other 3-D decorative elements may change each month or with the season such as Valentine’s Day or Halloween. The charge for this class is more because of the complexity and number of included supplies. 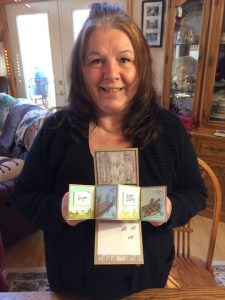 She also teaches her students how to design and make posters and tiles. Her classes are not limited to adults; she has offered sessions to pre-teens, for example. Liz is constantly coming up with new ideas or new variations on old ones. She has been making 3D cards for some time, but in January, Peter said Liz designed a new “active” card. “That;s a card that has moving parts,” he explained. “Before you open it, it looks like an ordinary card, but as you open, it expands out into what you see.”

Liz describes her crafting as an “addiction.” Her joy-filled days begin at 7:30 or 8 a.m. in her studio overlooking the lake. “It’s my happy room,” she said. And her husband, Peter, “has to pry me out of there.” He admitted this is often the case. Although he has other talents and appreciates hers, Peter does not engage in her studio projects. So far the classes have appealed to just women.

Although she has gained new students after her move to the lake, two women who have attended her classes for 15 years followed her despite the driving distance. One lives in Troy and the other in Remington. The over an hour drive is an apparent testimony to her projects, personality, and the joy they all share. 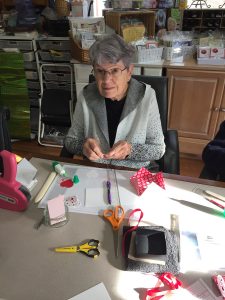 Part of Liz’s personal joy comes from being settled on the East Coast after many years of moving due to Peter’s career in the Marine Corps and working for military contract companies. Her life “had followed her husband” around the world starting in 1972. The experiences of teaching preschool, working as a buyer for the military, and other jobs also “made me a better person,” she said. Liz added that she became a “people person,” charismatic, artistic, and friendly. “I love life,” said the great-grandmother, and she’s happy that so many of the family members live nearby.

For Liz, loving life includes looking at the past. She has discovered that her artistic interest came from her French-Canadian ancestors, whom Peter has been researching along with other family trees.

Peter admits that prior to writing the family histories, his writing experience was limited to preparing technical manuals for the military. But after Liz confessed that she didn’t know much about her family history, including the French-Canadian pioneers, he began his research. 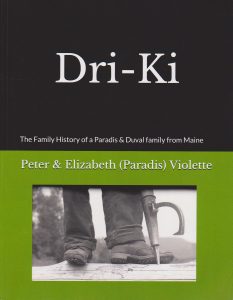 Peter and Liz Violette co-authored this book about her French Canadian ancestors.

He has written four books on family history, co-authoring “Dri-ki: The Family History of a Paradis & Duval Family from Maine” (available on Amazon) with Liz. The couple has visited France and also the area of Houlton, Maine, near the Canadian border where Liz grew up in a lively family of 12 siblings.

The book’s title comes from a Maine term referring to the accumulation of driftwood along a river’s bank, Peter explained. The name evokes the journey of traveling and landing on a new shore, which French ancestors from both their families had done. He has also created a booklet for their family with text and photos about the couple’s journey to Nova Scotia and Quebec as they researched ancestral history.

In addition to acknowledging the woodworking talents in her lineage, Liz has more immediate family to credit for her creative side. “My mother often would be crocheting, knitting, and quilt making,” she explained. “My father loved wood crafting. My family was also very musical. My mother played the harpsichord, my father the harmonica and spoons, and my brother the guitar and piano. All were self taught. When I was a teenager, I worked at the community center during the summers teaching arts and crafts to children.” Today, her grandchildren enjoying visiting her studio to make projects.

Peter gave her a spinning wheel made by the Paradis family (spinning wheels had been made by the family for generations), attesting to the family’s craftsmanship and artistic talent. Liz admits she doesn’t spin, but her other crafts include knitting and crocheting. She has donated her handmade “bonnets” to the neo-natal unit at Mary Washington Hospital.

Although many artisans and crafters promote their activities on social media, Liz prefers the word-of-mouth approach that fills her classes and creates a demand for her products and services. She can be reached at 540-840-1804 or by email at lizscraftstudio@gmail.com.

Callers can expect that the person answering will be provide not only information on classes, but an invitation to “joy” in her studio.